Today might be a tear jerker. This is a trigger warning (TW) – Cancer, Death, Grief, Guilt.
– For Gareth –

Title Song – Feelin’ Good – Muse – Yes I know there are many great versions of this song! I shall maybe discuss this later, he said, raising his eyebrows knowingly, maybe!

Now, this topic will be immensely hard to write, which means I am equally sure It will be hard to read for anyone who knew him. I really don’t want to unintentionally upset anyone and this is meant as a tribute to his life, but I am also very aware of how easily it can impact mental health. So please if you feel it might not be the right time for you, save this page and come back to it another time.

At the time of Gareth’s Death I wrote two things down, firstly was his Eulogy. I am literally about to re-read it for the first time in 10 years, so here is a copy for you to read also:

Well, fuck! There is that hole in my heart!

First things first, this Eulogy was  a tribute to Gareth, but also of his friends. Without Dave and Ferg, this would have never been put together. We supported each other to get through it. This was the hardest thing I ever wrote, up until this blog apparently!  Also the waves of support for Gareth. Dave had set up a website gmanrocks.com and we asked people to post stories and tributes that we could piece together into this eulogy.

Gareth was a conduit of so many different people’s lives, he connected and let them be part of his life and passed it around. It was evident instantly. It was overwhelming and beautiful. Probably the most amazing thing I have ever personally experienced. I remember excitedly reading the posts, looking at the pictures and videos people were posting and just being in awe of the sheer generosity that people shared their love.

I was at Uni during Gareth’s last few months, I was lucky enough to come back and see him as much as possible during his last week with us. I don’t remember a great deal from that time except holding his hand, I was hanging on his every word, not wanting it to be the last one I heard, and I was trying to persuade him to come up with some one liners to get in to people. I think lottery numbers was one of my suggestions, but to trail off before finishing them.

I don’t joke to make light of his life, but to honour him. He was as said in the eulogy, the life of the party. he was my happy side of life. He was my best friend, a soul mate if there ever was one. I don’t need to look back and romanticise his life, because he did that. His life was a highlight reel of fun, I honestly never had a bad time in his company.

So yeah, I never dealt with this. I thought I had at the time. I felt quite mature, oh it doesn’t affect me, I will only see the positives, love life…blah…fucking…blah. I think we all know how this one goes? A few years pass and I realise that I am chronically ill and I also don’t have a best friend to hold my hand, to hear my last words. It broke me. Utterly, completely. It manifested and was covered up deeply, it took 2 years of psychotherapy to clear.

I have a lot of themes I discuss, one I do mention a lot is loneliness and isolation. these things for me were built on things like not having Gareth be there to enjoy my moments. Not having the voice to turn to, to ask that question you can’t ask anyone else. Also for Gareth and I, we were big, mostly fat, geeks! Star Wars, Smallville, Hair Metal, Rocking out, Playstation, WWE, loved the Arsenal, we were twins with our interests and passions. So when I began to experience new parts of these worlds and there is so many more than that list. There was a space, where I just wanted to enjoy it with him.

I had never come to terms with how much I missed him, how much harder life was for me without him. I also hadn’t admitted it, I had driven myself away socially, and it just got so much worse. Therapy did so much to uncover some of these dark threads of depression. It is an ongoing process and this is part of that, being able to freely admit, how much I love him, how much I miss him.

I said I wrote two things when he passed. the second was a song:

Well y’know what, maybe if I had actually read this stuff years ago, I might have understood myself a little better.  Its easier to hide though, easier to pretend we are strong. Accepting defeat with grief is, for me as hard as accepting I had a disability. It pretended it wasn’t as important, as it clearly was too me.

I was lucky enough yesterday to reconnect with a lot of old friends from my life, most who I had pushed away, or fallen out with, or let go by without trying hard enough. It made me realise the one really important thing that Gareth left me with, was all these people. Memories are a wonderful thing to stimulate the happiness. Sentiment can sometimes be holding on to dearly to a negative thing, when we should be looking back and cherishing those great moments. Those people who were there, those places, those events, they matter. I didn’t realise how much until yesterday.

It inspired me to write this tribute to Gareth. There is no huge anecdote about what he was like or a diatribe about the person who he could have become. There is these things that we have left. Memories and these are some I am happy to share.

Gareth, I miss ya buddy! But I think I am beginning to understand what it means to move forward and honour their memory.

Oh yeah and most importantly of all…Fuck Cancer!

Ok so I know, I said in the blurb at the beginning that the Muse version of this song was the one I chose, well that’s not entirely true. It’s not very often you are lucky enough to enjoy a lost ones previous work. Another emotional death in my life was that of Cy, my grandfather. fortunately he left me with a body of work to enjoy. It just so happens that he was the first person to put the song Feelin’ Good to record. So not only do I get to enjoy one of my favourite songs, but I get my granddad to sing it to me.

Oh and because it’s awesome and we all need the pick me up, here is the Muse version:

Take A Read Of My Older Posts

;
Last for now. I have to thank Cass @indisposedandundiagnosed her effort and love spilled so much from this kindness box! She set up this scheme to support the spoonie community and I am so grateful to receive this utterly heartwarming gesture of love and kindness. I can't express how much I appreciate this lovely gesture. It was just what I needed when I needed it the most and so much cool stuff. Thank you once again to Cass and all the people and companies that support the kindness box project. Please check her page as she has just announced next year's kindness box. I will be back...but please know how much your love and support is appreciated. I look forward to being able to reciprocate again. Love and wookieehugs Xx . . . . . . . #love #support #awareness #friendship #invisibleillness #coping #spoonie #mentalhealth #CRPS #chronicpain #disability #happiness #smile #positivity #blog #recovery #writing #spooniestrong #spoonies #Depression #wookieehugs
This cute bear!!!
Putting on a smile wearing Aria
My new spoonie gadget. It's very good and I love the bottles
Some fun stuff from Jean my support worker!
Follow On The Right Path on WordPress.com 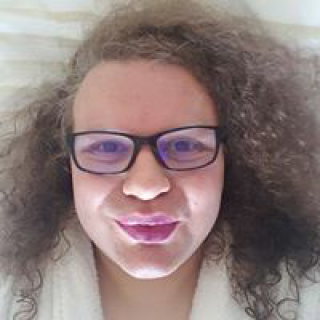 Finding my way in the world again, enjoying the smiles and love.